As our current production of All My Sons progresses into it's first week, we managed to pin down one of the busiest people on the crew. As Stage Manager it's a tricky business finding that fine balance of steering the ship during production. Many hours are spent weeks in advance getting to know the script,the Director, the cast as well as liaising with other departments before and during the show: lighting, sound, front of house, casting calls, ensuring cast and crew are safe and looked after, general health and safety, you name it and the S.M. will be in the know!

Here is the interview with Stage Manager Rebecca Short.

Hi, I’m Rebecca Short. I do a lot of stage management at Highbury. I joined here when my little boy was two. He’s eight now so I’ve been here for nearly six years.

I first got into Stage management at The Crescent Theatre in Birmingham. I wasn’t doing a lot of theatre stuff at the time and decided to join there. I wasn’t sure what I wanted to do and I got asked to crew on a show, and then basically just got asked if I wanted to Stage Manage, and I was: ‘What’s stage management? I don’t know what this thing is.’ So I then got trained how to sit on the desk and run the show, and do the sound and lighting cues and cues for the actors, and just found that I really loved it.

I joined here because I’d had a bit of a break from theatre after having my baby and missed it terribly. I knew that this theatre was up the road from where I live and that it had a really good reputation and had really high standards. I turned up to crew on ‘She stoops to conker’ which Ian Appleby was directing and got put into crew costume. And in the first rehearsal I thought: ‘I’ve found home. I’ve found where I belong and I’ve found my family,’ and the rest is history!

Stage Management is an interesting role. It can vary depending on what the play requires, but essentially you’re in charge of the production once it goes into production. You have responsibility for health and safety, and obviously if there’s an emergency whilst the show’s going on you have to take care of that and everybody back stage, but at the same time you’re trying to make sure that all the technical requirements of the show are pulled together. So you need to make sure actors are in the right places at the right time, that you liaise with props that everybody has got everything they need, that you liaise with sound and lighting to make sure that blackouts don’t happen at the wrong time and that you don’t open the curtains at the wrong time. It’s very much a case of coordinating everybody.

The reason I love it is probably because it gives me a sense of control and I like to see the finished result of what we’ve done and feel that I’ve had a big contribution in putting it all together. I really love getting a team together and for me personally, as a stage manager, I like the fact that all of us are pulling together for the same thing whether that’s acting, props, lighting, sound, prompting… We’re all there to get the show to the best it can be and I like to make sure that everybody gets on really well and that we have a good atmosphere backstage so we all give the best result to the audience when they come in.

I’ve had a lot of fun working on different shows. The Coarse Acting Show that I did earlier on in the year was really fun. It was a ridiculously busy show for me because there were so many set changes and so many things to get on and off stage and a really big cast. But I love that kind of challenge. I like to be kept really busy when I can. When I was doing Don’t Dress for Dinner we had shaving foam spilled in the interval. It was supposed to be a sauce which was part of the dinner party, and I had to come out and clean it up every single night. I quite often had a bit of banter with the audience whilst I was cleaning, and because the show was carpeted I had to vacuum the stage every night instead of sweeping the set. So that was entertaining.

All My Sons by Arthur Miller is one of my favourite plays. I actually studied it for my A Level English so I really wanted to work on this one. But I have worked with the director (Ian Appleby) quite a lot and we work quite well with each other. From a technical point of view from my side of things it’s fairly straight forward. All the action takes place in the same area so there are no massive set changes for me. It’s very much a case of me making sure the actors are in the right places at the right time for this show. We’ve got two young boys in the show so they’re obviously not experienced with Highbury as a theatre and productions on stage in front of an audience so I think we need to work on our backstage voices, so I’ll be keeping a very close eye on them but they seem extremely excited.

It’s a great cast and it’s a pleasure to work with all of these people because they’re so talented. I’ve worked with a lot of the people before so I know I can completely rely on them as actors. It makes my life as a Stage Manager very easy. I think we’ll be a really great team.

There are certain plays that do stick in your mind and you know during the rehearsals that it’s going to be something special and you get that little tingle down your spine whilst watching it. It doesn’t happen for every show – even shows that I’ve really loved doing – but this one does actually feel like that and when I was watching it the other night I got that little tingle done my spine and I got really emotional. I just know that it’s going to be a very special experience. 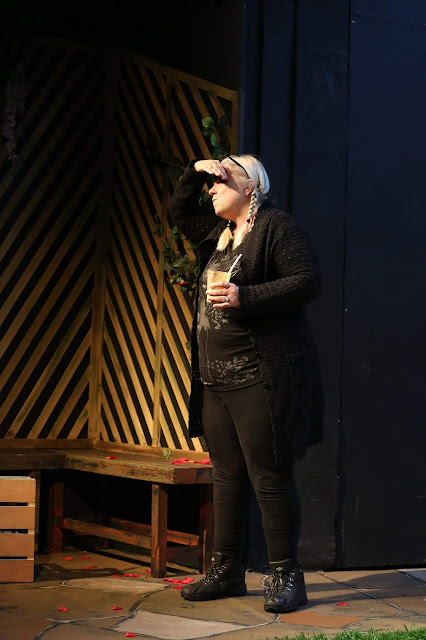 Advice for people who’d like to join the theatre:

I would say just get involved with a group like Highbury because it’s such a great experience and you can gain lots of skills. From a technical point of view whether you want to stage manage, or sound or lighting, it’s a great way to discover what you like and discover if you enjoy different aspects of the theatre. Whatever skills you gain are always going to be useful.