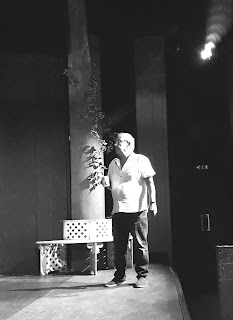 As a long-standing member of The Highbury Players and their current Chairman, Rob Phillips has got quite a few cards up his sleeve as well as a fair bit of experience under his belt. When he's not stripping off down to his birthday suit to pose for a theatrical calendar, strutting his stuff on stage as the 'bumptious' Henry Hobson (Hobson's Choice) or prancing around in his festive boxer shorts as Mince Pie's melancholic jack in the box Dougal (The Mince Pie of Doom), he's beavering away behind the scenes, creatively networking, sharing his passion for theatre in the wider community as well as working and finding space for his ever-growing family.

With the opening night of the last production of the season, Alan Ayckbourn's Snake in the Grass, a matter of weeks away, we caught up with him amidst the business of rehearsals to discover what would draw a man who shows great appreciation for the ridiculous to Ayckbourn's dark drama, and  find out what it's like directing three of Highbury's most experienced actresses.

What inspired you to want to direct this particular play?

First of all it's written by Alan Ayckbourn who is the country's most prolific writer, mainly of comedy. He's made his name writing comedies down the years and some very well performed comedies and farces and so on. This is very different. So the reason, in answer to your question: I thought, 'This is really intriguing. To have something that's not just a comedy written by Alan Ayckbourn - Sir Alan Ayckbourn - but one that has all the other ingredients'. A lot of - I won't give away the plot obviously - but it does have a lot of poignancy. It has a lot of danger really and it intrigued me. And I thought I'd love to have a go at that and see what I can do with it. There's only three actresses in it and I thought, 'That's another challenge...to see whether they would put up with me [he laughs] and they seem to have done so! Yeah, it's a very intriguing play and I thought, yeah, I'd love to have a go at it!

What's been your greatest challenge during production?

That's a really great question! [he laughs] We've been rehearsing now for about ten weeks in total and we normally have that sort of rehearsal period for each of the productions we do. To be absolutely honest with you, it's not been challenging... perhaps challenging is the wrong word. Any good play is a journey from A-Z and it's a question of really building the journey. All I'm really required to do is tell the actors where to move. So challenging in a good way, really bringing out the best in the characters and the best in the play, in the plot, because it's a journey. Light and shade, making sure they're not always in the same place verbally, playing a few games on that. So rather than being challenging it's been a good challenge, actually encouraging them to really make the best of what they've got, both in dialogue and their characters.

What would you like the audience to take away from this experience?

That's another good question! They will be a bit confused I think by the end of the play. They'll think: 'What on earth...?' Because there's a lot of plot twists and turns in it, which is great! I think what I'd like them to take away is having to think twice about why it all happened. Because it's about relationships, very much about the relationship between two sisters, and how things can turn terribly wrong if you're not careful... that sort of thing. So I think what I'd like them to take away is that they've had a really good, engaging evening with some comedy, because it is quite funny in parts but it also carries quite a few messages. So a good evening; entertaining evening; interesting evening. I'm hoping they'll take away all those sorts of elements. But I'm sure I'll be talking in the bar with some of them afterwards about what on earth went on...which is good! It's good that people are thinking - you know - it's forcing them to think why is this happening, why did it happen, what's going to happen next? So hopefully that will all happen.


How do you feel about working with an all female cast?

I've really enjoyed working with the ladies to be honest with you, and I'm very lucky that I've got three really good... (these days they call them actors, but never mind about that sort of thing) they're three really great people and performers. I am extremely lucky.

What is in store for the future?
I don't know! We put on seven productions a year at Highbury and I have acted in a few over the years. I will be directing again next season, but this time it will be a comedy. I don't want to give too much away but it will be a bit of a raucous comedy. I do like comedy! [He grins] It'll be a bit different to this play! And also - I'll make a bit of a point of this - I run what we call an academy for experimental theatre. Those people who can spare the time come along with bits and pieces, new plays, come along and do what they can - there's a lot of commitment -  I plan to do a lot with the academy, it's just fitting it in when I can, obviously, I still work, but I love the place. I love theatre and it's great when you get the acknowledgements and the applause from the audience. All the efforts have been appreciated, so...it's great!

Snake in the Grass opens at Highbury Theatre Centre on Tuesday 3rd July 2018.

Tickets are available from the Box Office at http://highburytheatre.co.uk/

Follow us on Instagram and Twitter for more behind the scenes and sneak previews!
(All social media links can be found in the side bar to the left) 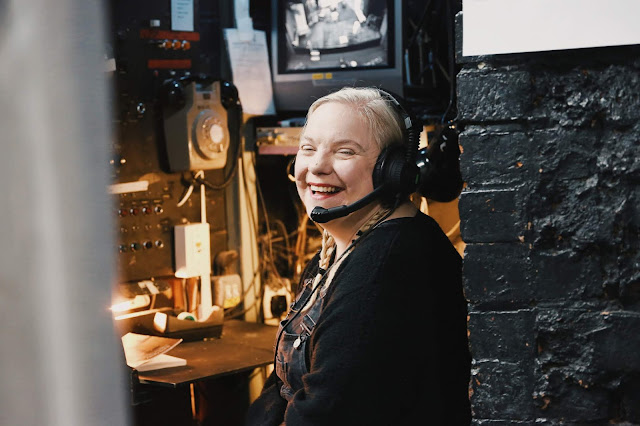