In the weeks following Highbury Players 5* production of 'Beryl', Nicki White looks back on an experience she will never forget, as a member of the tight knit crew who worked on one of Highbury's most inspiring theatrical masterpieces this season.

Walking in via the stage door entrance, the theatre atmosphere is electric. Three months of hard graft and dedication has reached a climax on the evening of the final dress rehearsal of 'Beryl', the play documenting the life story of the Yorkshire cycling legend Beryl Burton, written by the talented Maxine Peake.

The Director, Ian Appleby, is sitting patiently in the green room, script and notes in hand. Words of advice and suggestions for any final improvements are whizzing around his head. Ian is a Director who never switches off. He looks up as I enter the room and smiles, saying, 'I've made a few notes for tonight!' This man has been charged with a passion for this play and for Beryl Burton herself from the very outset and nothing but perfection will suffice from his crew, the cast, but especially from himself. He is a man with a vision; there's something special about this play and he knows it.

The kettles are on and the clinking of teaspoons and mugs busily combine whilst the four actors assemble for the final briefing. Sharon Clayton, Kimberley Marlow,  Philip Astle and David Weller are now experienced 'stationary' cyclists, having spent three grueling months in the saddle. There is a great sense of camaraderie between them and the director as jokes and laughter fly around the room, as if these relatively new acquaintances are in fact old friends who share a common past. Of course spending three intense months together builds relationships which can last a lifetime.

It's a family and after all, 'we are merely players', or so I'm told.

Soon the whole team has gathered together. Marion Chittenden, Andy Wilkes and the Tony's (Dillon and Reynolds) who sit in the gods, commanding light and sound; Cath Lee-Redmond (Prop designer extraordinaire and trophy queen) and Sandy Haynes (resident all rounder, bed transport and chief coconut clopper) otherwise know as properties. Becky Short enters the room, Stage Manager and backbone - she is calm and collected with an air of stoicism for the task ahead; followed by Yvonne Lee, long standing actor and Director but on this occasion charged with the essential role of continuity. I sit and look around me and for a moment remember the countless others who have given their valuable time to make this all possible; set design, builders, costumes, programme design, photographs, box office, flowers, the list goes on and on.

I feel somewhat out of place amongst people who's creativity and humility is clearly evident. But before me is a level playing field. All are welcome, all are equal and everyone has something to bring to the table, even me, so it is at Highbury. It's a family and after all, 'we are merely players', or so I'm told.

Swiftly the room empties and we make our way as one man to the stage. With props and costumes checked one last time we take our positions. The house lights go down and the original footage of Beryl Burton is projected onto the screen rear stage. Sitting in the wings Yvonne switches on her reading light, opens the script to Act 1 and we all take a deep breath as four cyclists take to the stage and I think to myself; 'At this moment in time, there really is nowhere else I would rather be.'


Roger Clarke's review can be found at:  behindthearras - Beryl Review 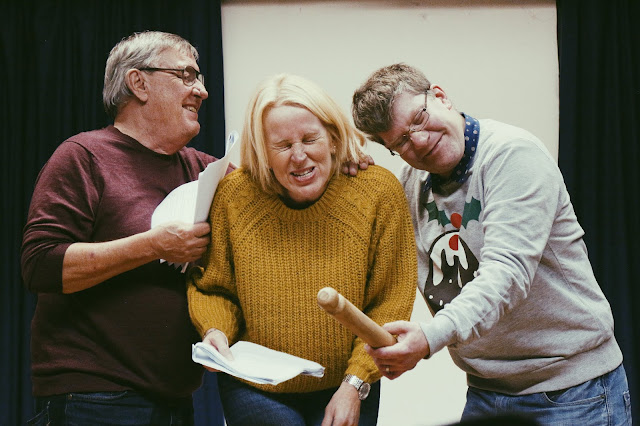